The University of Alabama Police Department operates under four primary divisions:  Operations (sworn and non-sworn), Support, Administrative, and Investigative. Each division is commanded by a police command staff officer who reports to the Chief of Police. These divisions provide overall command for all daily operations. There are several units or shifts that compose each division.

The Support Section is under the command of the Assistant Chief of Police.  The Support Division is tasked with the responsibility of overseeing the Investigative Branch and the Administrative Branch. 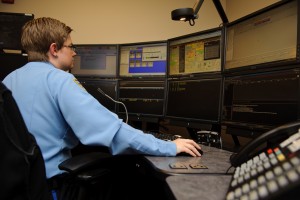 Police Communications serves as the information center for the department.  Staffed 24 hours a day, 7 days a week, the trained professionals in our Communications Division coordinate emergency and non-emergency responses to campus and the area immediately surrounding campus, whether by Law Enforcement, Fire or Medical personnel, with the use of Computer-Aided Dispatching.  In addition, our Communications Operators receive direct calls from the emergency “blue phones” located around campus, as well as alerts from the Rave Guardian app. You can reach our communications office at (205) 348-5454. 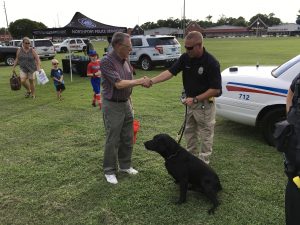 Community Relations directs its efforts toward reducing criminal opportunity through educational programming and crime prevention activities. Crime prevention programming is provided to housing and residential communities, Greek organizations and the university community at large. The Community Services Officers assist with the public information function, informing the public about the occurrence of crime on campus. Additional functions include crime analysis and Clery reporting to the federal government. The Safer Living Guide, a reference guide to University safety and contact information, is a product of the Office of Community Services. For more information about UAPD, please contact Sgt. Vonda Collins or Officer Ron Prewitt at 348-8361.

Community Oriented Policing is a philosophy of full-service, personalized policing where the same officer is assigned to a specific geographical area on a permanent basis, working in a proactive partnership with citizens to identify and solve problems. Officers work out of satellite offices located within the communities they serve. The focus of community oriented policing is not simply on responding to crime, but on preventing crime and resolving community problems.

A variety of educational programs are offered at a community level by the police department.  Common program topics include the following:

The Internal Affairs function is responsible for overseeing the investigation of all complaints against departmental personnel. The department holds its employees to the highest professional standards and vigorously investigates any allegations of employee malfeasance or misconduct. Internal Affairs also makes policy and training recommendations based on analysis of complaints. 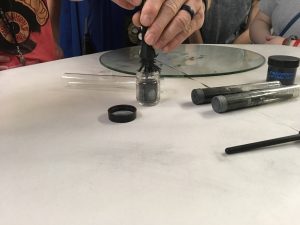 The University of Alabama Police Department currently maintains explosives detection dog teams that work diligently to provide a safe environment at venues both on and off campus. These teams train weekly to assure that they provide the highest quality of service to the community.  These teams perform a variety of community relations functions, and supplement general patrol operations. 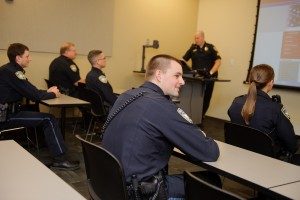 The purpose of the division is to provide a high standard of public safety and assistance twenty-four hours a day for the protection of the University Community. Patrol officers provide a wide variety of law enforcement services including responding to calls for service, writing reports, conducting preliminary investigations, and providing security to the university property. These responsibilities are achieved in a variety of methods including foot patrol, bike patrol, ATV’s, and a fleet of marked patrol units. 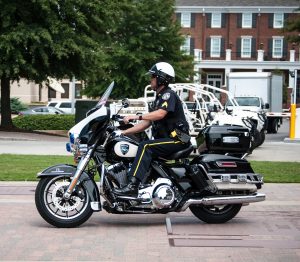 The University of Alabama Police Department’s Traffic Division is tasked with the following responsibilities:

Professional training is a high priority with the University of Alabama Police Department. Annual training in law updates, force issues, first aid, investigation techniques and many other areas are conducted by both departmental and outside personnel. The training is always directed toward providing officers the most up-to-date techniques and knowledge to effectively provide quality service to the University community.

Security Resources is a 24/7 operation that focuses on providing and maintaining an environment of safety for the campus community and safeguarding property.  Security Resources also combines dedicated field patrol with the utilization of integrated security systems.  Central Monitoring, the hub of Security Resources, monitors cameras and access control throughout campus.  Since its genesis, Security Resources has expanded to become the University of Alabama Police Department’s second largest division, with over forty-five trained, unarmed security personnel.